This pandemic a surprising number of young people have expressed the desire to move from cities to rural areas and live a simple farming life. While I totally understand the appeal, here’s some warning from a city person who’s lived in villages a bit…

I doubt anyone of you is actually going to do it, but you should still know this – running off to a village might not be the escape from the rat race you’re looking for. Before we dive in to the slightly dream shattering reality, here’s a picture during the Punjab elections when we took a break and showered in a random farmer’s tube well. We did this a lot, and I highly recommend it! 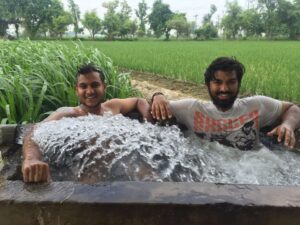 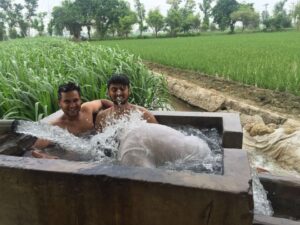 Our fields in my native village: There’s a lot more I could write, but I think you get the idea… There are major advantages, like you’ll have super low expenses and a moderately comfortable life without pollution or city noise. It still isn’t the utopia a lot of people are imagining though, and village life will likely feel MUCH harder than your urban lifestyle with a corporate job.

PS: Thanks for reading till the end. Your opinions, experiences and comments are always appreciated, so comment below.

Bonus clip: Here’s a video from my family’s pond in our village. We recently (2 years ago) started a small experiment with fishery there! That’s a topic for another post though…

6 Thoughts on “Dreaming of a utopian village life? Read this first!”